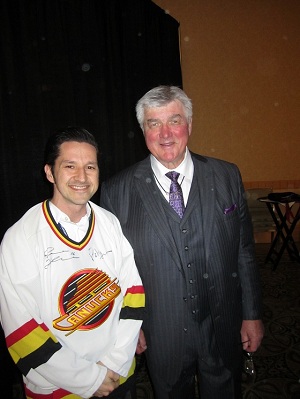 I had the honour of meeting Pat Quinn today. For those of you who do not know, Pat Quinn was the head coach of the Vancouver Canucks when they made a run for the Stanley Cup in 1994.

He gave us a presentation on leadership where he talked about the qualities needed to be an effective leader in our ever changing world. What was really interesting were some of the stories he was telling us about his coaching experience.

One of the funnier stories was about Gino Odjick, who was part of the 1994 team.

It was a game when the United States was first heading into Iraq. There was a sign in the crowd that said “Gino is tougher than Saddam”. When Gino skated back to the bench, he started to talk to Trevor Linden and asked

Saddam? Which number is he?

After his presentation, I ask Mr. Quinn what he had said to the guys after the game 7 loss against the New York Ranger. To paraphrase, he said that it hurt. They were the better team that night and they deserved to win it. In addition, he still thinks about the guys and how painful it was.

It was such a genuine moment and answered a question that I’ve always wondered about since 1994.

I’m really happy and fortunate to have had the opportunity to meet one of the people that has made an impact on me and my love for the Vancouver Canucks – Pat Quinn. Thank you very much!